Men sought after cash grab from Tescos in Tilbury

POLICE in Grays want to speak to two men captured on CCTV about the suspected theft of a small sum of cash from Tesco Express in Calcutta Road, Tilbury on February 26 around 6pm.

Two men were using a self service till and are believed to have taken cash from an open compartment door.

The men are described as both white, mid 20s and spoke with an accent. One was about 5ft8-9 tall wearing blue jeans and a zip-up hooded grey cardigan with skulls on the chest and arm area and white trainers, the other was taller, wearing a black and blue Adidas tracksuit jacket and washed out black jeans and grey trainers. 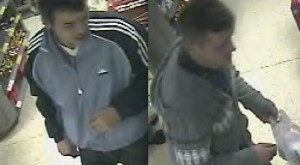 Anyone who recognises the men or can name them is asked to contact Pc Lee Wayland at Grays Police station on 101.