UKIP unveiled the latest defector to their ranks in a meeting at Orsett Hall last night (Tuesday).

Anne-Marie Waters contested the Labour candidacy for the Thurrock seat in 2011, losing to Polly Billington.

The Streatham-based activist went on to contest the Brighton Pavilion candidacy in 2012.

For many, Anne-Marie espoused a traditional left wing philosophy which may well be the reason that she was backed by Andrew Mackinlay in 2011.

However, speaking to her before the meeting, Ms Waters told YT about the experience she endured running an anti-Sharia law campaign and, in Ms Water’s opinion, the lack of support she received as well as the on-going attacks on her.

Here is part of the opening remarks by euro candidate, Patrick O’Flynn. 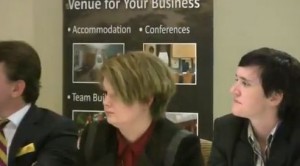