Aveley Cyclones say thank you to their sponsors

THE Aveley Youth Cyclones under-sevens were formed at the end of 2013 and have been playing in the Thundermite League since January 2014.

They are a fantastic group of boys who love their football and who have gelled really well in a short time.

They would like to say a massive thank you to their sponsor Newsprinters who have brought them two new kits.

They are looking forward to showing them off during the summer tournaments and the new season ahead. 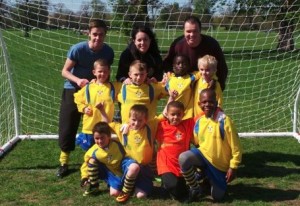