WITH less than a month to go before polling day, East of England Conservative European candidates launched their campaign. They were joined by Eric Pickles MP, Secretary of State for Communities and Local Government, and Essex Member of Parliament. 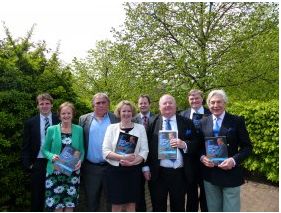 The seven Conservative candidates unveiled their manifesto for the campaign and made it clear that only David Cameron and the Conservatives can deliver real change in Europe and give people their say in an in-out referendum.
This will only be possible with a strong team of East of England Conservative MEPs elected to back David Cameron in the forthcoming renegotiation.

“Only the Conservatives have a credible plan to reshape Britain’s relationship with the European Union, and to put this to the British people in an in-out referendum by the end of 2017. Labour and the Lib Dems oppose this plan and won’t give the British people a say. UKIP can’t deliver on what they promise.

“We have a strong team here who are committed to getting a better deal for Britain and who have to fight every day to stop nonsense regulations and attempts to increase EU budgets that would hit British businesses and taxpayers.

“For real change in Europe vote Conservative on 22 May.”

“Our manifesto sets out a clear plan for change and offering a choice in a referendum. This manifesto was not dreamt up in the back room of a pub on a beer mat. This is the accumulation of four years of detailed work by Conservative MPs and MEPs. We believe this manifesto for real change in Europe can be delivered.”