Tablet found after man arrested for theft in Grays

POLICE would like to hear from anyone who had an electronic tablet device stolen in the Grays area in early April. A 20-year-old Grays man was arrested on suspicion of theft on Friday April 4 after he was seen hiding in the garden of a house in Hathaway Road.

The device was recovered from the garden at the time of the arrest but no owner has yet been identified. If anyone recognises the item from the pictures or has any other information about the theft they can call PC Rory Phillips at Grays Police Station on 101. 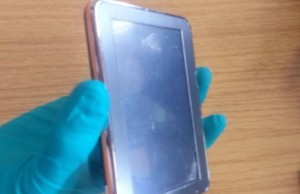 The man arrested was interviewed and is currently on police bail to report back on Wednesday May 7.