Ward by Ward: The Homesteads: One of UKIP’s best chances?

UP until 2007, there was a Labour representative among the three councillors in The Homesteads. It looks like somewhere along the way, Labour lost interest or could not, like Tony Benson, find a councillor that was embedded in the ward and prepared to fight for it.

Cynics might suggest that the unknown South Ockendon resident, Jennifer Smith, who has been chosen to fight the Homesteads, is a token candidate that is not under any pressure to get out and about in the ward. That same cynic might suggest that this is a deliberate tactic from Labour who are privately hoping that UKIP might dislodge the Conservatives in The Homesteads.

Labour’s Richard Speight ran a cracking campaign in 2011 and deserved to get 1055 votes. In 2012, Liam Preston was nigh on invisible and the vote dropped to 704 votes.

Meanwhile, this has, as we have said before, been a fertile political area for UKIP. Peter Prendergast polled 567 in 2012 and 485 in 2011. The local UKIP man must really fancy of his chances and could be the dark horse of 2014.

That would be a shame on sitting Conservative councillor, James Halden. In our little political bubble, it has been a case for James of “Growing in public” but at least he puts himself out there and he has, if we say so ourselves, developed a good chin.
It could also be a case of what were you like at your work, when you were 22?

James has a fine grasp of all the issues that are central to residents in the Stanford and Corringham area from DP World to crime in Balstonia Park. Yes, he get things wrong (Corringham Police Station) but he also gets a lot right and is becoming very adept at asking difficult questions.

The chamber would be poorer without him and we are sure that James will go on to make a fine contribution to civic society over the next decades. However, the voters don’t inhabit the same bubble as we do and so it may get very very close.

If the Tories only held off Labour by 111 and UKIP by 248 then this is going to be close. It will take a big effort by Team Halden to sway the “Bloody nose” brigade. 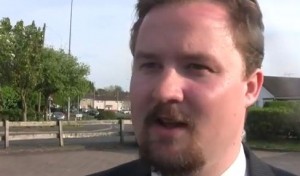 72 Responses to "Ward by Ward: The Homesteads: One of UKIP’s best chances?"