Tories complain after being “stoned by UKIP supporters” in Thurrock

A CONSERVATIVE activist has hit out after he claims that Tory campaigners had stones thrown at them whilst out canvassing in Thurrock.

YT understands that Amandeep Singh Bhogal was out with Thurrock MP, Jackie Doyle Price and other campaigners in West Thurrock on Saturday morning when they were met with a barrage of abuse and missiles.

Mr Bhogal went on Twitter to express his disgust.

He said: “Super Saturday morning of campaigning with @JackieDP in #Thurrock after being pelted with stones by @UKIP supporters!”

YT later spoke to Mr Bhogal and asked him how we was able to identify them as UKIP supporters.

Mr Bhogal said: “These were certainly UKIP supporters. They stated very clearly, repeatedly and loudly they were voting UKIP and wanted Farage to be PM!”

Father-of-two Mr Bhogal has been a very active Conservative member over the past few years and was tipped to stand in Thanet South in the next election.

The former diplomat stressed that tolerance is key in society.

He said: “Well, it certainly did remind all of us out this morning of how some people are just so intolerant of other’s views and political stances”.

UKIP’s Thurrock organiser, cllr Robert Ray said: “I have checked with all our organisers and none of them has any knowledge of such an incident.

“We cannot be held accountable acts such at these.” 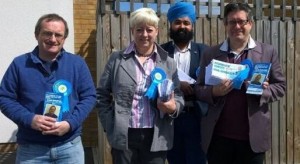