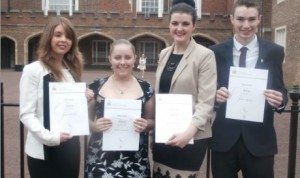 young people from Thurrock were rewarded for years of hard work by a trip to St James’s Palace to meet the Earl of Wessex, Prince Edward on Tuesday (29 April).

The young people, Ellie Shanley, Janice Parker, Hannah Travers, Reece Seddon and Elizabeth Ogundele – all from Thurrock Council’s Duke of Edinburgh’s Award scheme – were invited to a special Gold presentation to receive their Gold Awards in the presence of Prince Edward, one of the Award’s trustees and a Gold Award holder himself.

Their certificates were presented by Charlie Pitcher, who rowed the Atlantic Ocean solo in a world record time in 2013.

Following the presentations Prince Edward chatted with the group about their achievements, what they had learned, and to where they had travelled.

The palace’s Banquet Room was packed with other Gold Award receivers from across the South East Region, their proud guests and dignitaries.

The award they received represents the culmination of many years’ commitment, participation and service to the local community.

Thurrock Council has many participants undertaking the Award at Bronze, Silver and Gold levels through both school-based and Open DofE Centres. For further enquiries of the DofE in Thurrock, please contact the DofE Office on 01375 644589.