Palmer’s students team up with Youth Creation for concert

The Concert took place on the 1 May 2014 at the College with the night being sold out in days. The concert was part of a marked unit and showcased the talent of both Music and Performing Arts students and featured musical performances, solo performances and choreographed various songs from the Musical Matilda. The students were very fortunate to have ex-students Jody Byrne and Shannon Williams come in to choreograph the songs as well as members of the dance group to perform in the concert.

Ex-Palmer’s Performing Arts students, Jody Byrne put together the Stanford-le-Hope based dance group – Youth Creation in 2006 after leaving College. Shannon Williams, who also attended Palmer’s College is also part of Jody’s team and teaches dance/singing.  Andy Mayell, Curriculum Manager for Music and organiser of the show, said: “Completing group work and allowing classes to collaborate is something which benefits the students immensely. Not only are the students collaborating with other classes under our guidance but we also teamed up with the Performing Arts School Youth Creation who was finalists at Britain’s Got Talent 2013. It was fantastic to get younger performers involved as we could perform the songs from Matilda in a more realistic way which, when combined with a live backing, added a new level of professionalism which we hope to continue in future productions.”

The students also raised a fantastic £336 for the Karis May Darling Foundation. 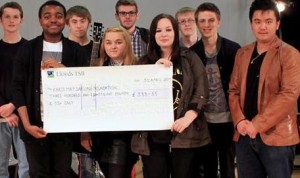