THURROCK T-Bird, Rachael Burford has been named England women’s rugby player-of-the-year. Rachael has been a regular in the England women’s team and the national 7s side over the last few years. 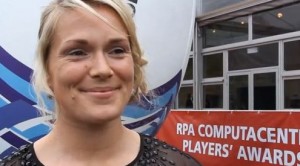 Reacting to news of her Rugby Players’ Association award, Burford said: “I am extremely honoured and it was a privilege to be nominated alongside some of my friends and team-mates.

“I am really made up to have gone on and won the award.”

Injury led to Burford being left out of the recent Sevens World Series but the centre has been a pivotal figure for the national side.

She is part of the World Cup training squad that is preparing for the tournament, which takes place in France this summer.

Burford has been involved in the last two World Cups, with England losing out to New Zealand in both finals.

“Preparations are going well and in the last month we have really ramped things up,” she said, following a training camp in Leeds.