Choosing the High House Production Park in Thurrock, the speech could be seen as the first as we head towards the General Election on May 7th, 2015. It could also indicate that Thurrock will be one of the key battlegrounds of the whole election.

This is despite the Tories only having a majority of 92. It is because of the tremendous support UKIP received in both elections.

Mr Miliband touched on the european issues but also focussed on issues of employment, the cost of living and regeneration. 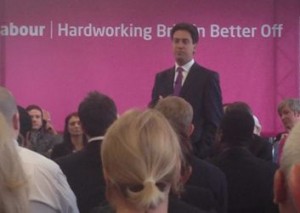 Today I have come to Thurrock to talk to you about Thurrock’s future and the country’s future.

I have come after the local and European elections.

In ordinary times, the point of me being here would be to come and tell you that these elections show Labour can win.

That’s the typical politician thing to do.

But these elections show something much more important; which goes beyond the fate of any one party or any one government.

For those who voted for UKIP, those who came to Labour, to the millions who didn’t vote at all, the resounding feeling was one of deep discontent with the way the country is run.

So I am not here simply to tell you Labour can win.

But to tell you why we must.

And to talk about the larger lessons in the results for our party and our country.

Big changes have happened to Britain.

Economically, socially and to our politics.

And millions of people now feel that our country does not work for them, politics does not listen to them and cannot answer them.

They believe the people who work hard, try and support their families and build a better future have been left behind, and the major parties work for others and not for them.

Some of those voted for UKIP in these elections.

And far more people did not vote at all.

These are challenges for all political parties.

It’s up to other leaders what they say, but I’m not going to shy away from these challenges or pretend they don’t exist.

If Labour’s going to change things, we have to be in communities all over Britain talking about the issues that matter.

And that’s why I am here.

I want to start by talking about some people I met here with Polly Billington, local Labour candidate, on Sunday.

Because they tell us so much about Britain today.

She has got good college qualifications.

But she’s only able to find work for 12 hours a week.

She thinks she might be better off on benefits.

But she’s working because that’s the way she was brought up. That’s the value she believes in.

For her, the link between hard work and being able to do better feels like it has been broken.

On Sunday, I also met Carol, who had just turned 65, who is also here.

She’s got grown-up kids, with kids of their own.

Her kids have good jobs and decent homes.

But Carol worries about her grandkids.

She told me on Sunday: “The low paid jobs they can get mean they just won’t be able to afford their own home.”

And of course, lots of the people I talked to on Sunday were talking about immigration and the changes people had seen here in Thurrock.

Big changes happening to this community.

These are the realities of work, of family and of community.

Realities like those I have seen so often in my constituency in Doncaster.

Realities that are reflected across the country.

Now it so happens that the people I spoke to on Sunday weren’t necessarily UKIP voters, but they knew people who were.

One person said to me: “The ordinary man in the street is not being heard enough anymore. They thought UKIP heard them.”

What she was saying was that some of the people who voted for UKIP came from that part of working Britain who work hard for a living, in tough jobs and seek to provide for their family.

People who love our country.

But feel left behind by what has happened.

Some people who in years gone by would have been Labour till they die.

Their parents certainly were.

So how have we got to this point?

And what do we do about it?

Let me tell you how I see it.

More than anything it is about the big economic change we have seen.

The industry of our country, the docks near here, the mines in Doncaster, my constituency, provided a decent wage, a decent life, a decent pension.

A job was not just a job.

It was the foundation of community.

And about thirty years ago these secure jobs with good prospects started to disappear.

And they weren’t replaced by similar jobs for the future.

At the same time, immigration has been changing communities fast, including here in Thurrock, with people seeking to build a better life here.

And the pace of change is quicker than it has ever been.

So over the last decades there were big changes happening in our country.

And fewer and fewer working people thought the country worked for them.

That was made worse when political scandals happened, like MPs’ expenses.

And as a result by 2010, too many came to think that no party was standing up for them, including Labour.

You in Thurrock know that the last Labour government did great things: rescuing our NHS, investing in schools and supporting working families with tax credits.

But they were not enough by themselves.

Because ordinary working people, people who weren’t rich, felt life was getting harder.

Our embrace of the future meant that some people thought we didn’t respect the loss they felt from the past.