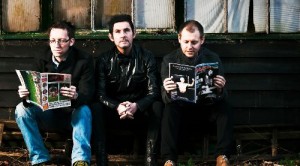 lovers of new, live, local rock music, Brandon Groves Community Hall in South Ockendon is the only place to be on Saturday 21st June in order to be at the launch of a powerful new EP.

Bow Flats are celebrating their second birthday with a launch of their ‘Time Is Money’ EP – a six track feast of power and harmony. The tracks record a history of the band, showcasing old favourites as well as brand new tracks which will debut on the night.

The three-piece, made up of lead singer/guitarist Neil Davies, drummer, Tony Buckley and bass player, Neil Lewin, cite a huge range of influences and the songwriting evokes melodic touches of Crowded House, merged with the all out, unstoppable force of Supergrass and Foo Fighters.

Bow Flats will be joined on the night by Paragon, a 70’s and 80’s rock covers band as well as The Late Shift, who will top the night off with a sprinkling of hits and gems from across the decades. One final act is yet to be confirmed.

Entry is £2 for members of the club – £4 for non members and the entertainment will begin at 7pm.