STEPHEN Metcalfe, local MP for South Basildon and East Thurrock, recently jumped out of a plane from 13,000ft to raise money for The Soldiers Charity.

The MP completed the tandem sky dive alongside the Army’s freefall display team, The Tigers.

The Soldiers Charity give lifetime support to serving and retired soldiers and their families by providing financial assistance to soldiers and their families when in need. Even when a soldier leaves the Army they are still eligible for assistance. Half of the charity’s money is given directly to individuals to help in areas such as debt relief, mobility assistance, education bursaries, and care home fees. The other half is given as grants to other charities.

Mr Metcalfe commented: “Our armed forces have put everything on the line to serve our country and they have done so time and time again. Their courage is second to none, therefore it was the least I could do to test my courage!”

“The Soldiers Charity looks after thousands of soldiers and their families during extremely difficult times and it was a privilege to play a small part in raising money for them.”

Brigadier (Ret’d) Robin Bacon, Chief of Staff at ABF The Soldiers’ Charity, said: “There are not many people who would sign on the dotted line for a skydive – it takes a brave person. It’s a challenging way to raise money. Stephen is the first MP ever to jump for us – we’re extremely grateful for the chance this gives us to spread the word throughout Parliament and beyond. We have a number of jumps throughout the summer so we want to encourage others to take this big plunge.”

It is not too late to sponsor Stephen. If you have any money to spare and would like to support the cause, please visit: http://bit.ly/1jfFoQ3.

For more information about The Soldiers Charity, or to sign up for the next jump, visit www.soldierscharity.org/events 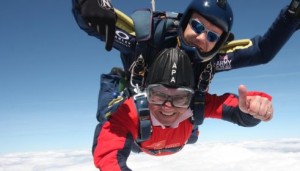