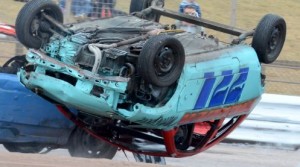 team racing returned to Arena Essex on Sunday with the Rookie Micro Banger Team event, in memory of the tracks founder, Chick Woodroffe, attracting a huge entry of close to 90 cars.

Amongst the entry, the all lady team “Chick’s Chicks” performed very well during the day, with Claire Jones being their leading performer, winning a heat and duelling with Banger World Champion, Jason “Boxer Jack” Jackson in another, before clipping a kerb and rolling over. Undeterred she still battled on to the finish. Debbie Woodroffe, Remi Gay and Stacey Ruskin similarly all gave as good as they got during the afternoon, resulting in an eventual fifth place finish.

Heat one was only a matter of moments old before the first rollover of the day, for the Team OXO man, Kevin Powers. From the restart Sam Watson took a tumble at the end of the home straight but landed back on all fours whilst Paul Cheeseman took a heavy fencing courtesy of Billy King. A recovered Cheeseman clumsily attempted a dangerous lunge back at the passing King but thankfully didn’t connect whilst Jason Jackson grabbed the first win of the day.

Heat two saw a few of the racers going a little over the top with the contact with some penalties inevitable. Simon Peters followed Remi Gay into a number of parked cars on the QE2 bend before a head on between Matt Lewis and Davey Hammond saw the pair left open to big hits, Hammond taking a shot from Tony Hutton and Lewis falling fowl of a ridiculously over the top T-Bone from Ronnie Hammond which saw the latter disqualified for the day. Claire Jones took the win.

Heat three saw a big crunch at the end of the home straight with Jamie Barnard taking a big hit from Jamie Harding, Barnard then taking further damage from Danny Mitchell who was spun into his parked car by Lee Johnson. Claire Jones’s rollover was nearly matched by Steve Haines, who only just managed to keep his car on its wheels. As Paul Whiteman took the win, Jamie Harding rolled his car on the QE2 bend bringing about a rather more hasty red flag.

The final saw an incredible 69 cars on track, one of the biggest races of recent times. Unsurprisingly carnage ensued with an early restart needed after the car of Paul Harrison fell over on the pit bend. A heavy shower ensured that the restart saw car after car join a pile up at each end of the track with the race falling eerily silent for a moment until a complete track blockage at the QE2 end was remedied by a few cars managing to barge their way through the blockage. Lewis Barber not one of them, Lewis having chosen to bury himself well in the back of Micky Vincent instead. Not many of the 69 cars made the finish, only a half dozen, but one of them was winner Jason Jackson, who secured his team the overall title.

The Chick Woodroffe Memorial final for the Lightning Rods was dominated by Anthony Lawrence with Steve Gooch similarly dominating the Stock Rod version. The 6-11 year olds had an outing in the Ninja Karts with Alfie Witherall winning the final, despite getting scarily close to spinning out as the rain made it tricky for the youngsters. Harvey Hendy and Jack Simmons completed the podium places.

The next action at Arena Essex takes place on 13th July when one of the highlights of the season takes place, the annual Caravan Race!

A stock pile of caravans for the regular Banger racers to use has already been secured, so we are assured of a decent entry on the day. Whether the auto-sculpture of a few years ago, when the QE2 bend became a sea of caravans and car debris, can be repeated can only be found out by turning up on the day. Start time is 1pm with a full supporting cast of National Banger, Junior Banger, Stock Rod and Lightning Rod racing.