European Union sees the back of Thurrock UKIP’s Tim Aker

BEFORE the start of the first European Parliamentary session, 24 UKIP MEPs, including Thurrock’s Tim Aker, held a March for Freedom to signify their work for the freedom of people from EU legislation and waste.

At the beginning of the session, as the EU anthem was played, UKIP MEPs stood and turned their back on the EU flag.

Responding to both events, UKIP Deputy leader Paul Nuttall MEP said: “We don’t recognise or respect the EU flag or anthem. They are both symbols of our servitude inside a political union which the British people reject.

“We will do everything we can in European Parliament to oppose the Federalist system which ignores our national democracy and pushes millions of people across Europe into poverty and unemployment. We stand up for our people, not the EU flag and anthem.

“National democracy and EU membership are incompatible. We will do everything we can to free ourselves from this corrupt institution.” 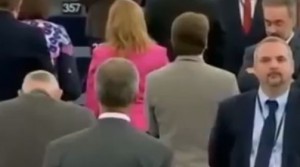