THE Martial Academy were celebrating on Saturday 14th June when two of their MMA fighters competed at The Lamplight Theatre Durham, in Ian the Machine Freemans Machine MMA8.

The lads from Tilbury were debut competitors and demonstrated just how hard they have worked and trained at the Martial Academy.

Danny Hodgson had a fantastic fight demonstrating his considerable technical skills, and was unfortunate in the 3rd round to have a TKO

Rocky Stenning, demonstrated his strength of character to win by a ko in the first round. It is clear the Martial Academy will grow from strength to strength with more competitions planned for September. 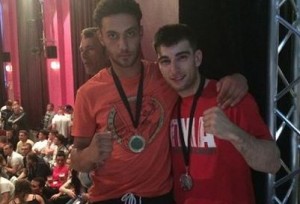 Watch out for the girls who will be competing later in the year.