Nominations are flooding in for the first-ever Thurrock Education Awards.

OVER 30 teachers, school leaders and support staff have been nominated just a week after Thurrock Council leader Cllr John Kent announced the celebration of achievement in Thurrock’s schools.

Cllr Kent and the council’s children’s services director, Carmel Littleton, last week joined the main sponsor, the Port of Tilbury, at an event to mark the official launch. 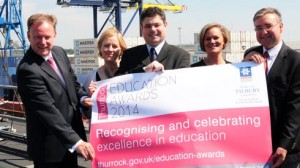 Cllr Kent said: “The awards are clearly already inspiring pupils, parents and others involved in education to recognise and celebrate the impact of the best and most committed people working in or supporting our schools.

“After meeting with leaders of the Port of Tilbury we have seen that their emphasis on education and training shows that knowledge and skills are vital to both employers and to the life chances of our young people.”

The port last month received a national award for adult learners for the Thurrock Skills Project and their work with the long term unemployed. The port’s emphasis on education and training as a route to employment and career progress recently led to an invitation for the training and development manager to speak at a major industry event at the House of Commons.

The port’s chief operating officer, Perry Glading, said: “The Port of Tilbury London Limited is proud to be the main sponsor of the first Thurrock Education Awards. We are determined to help local children and young people access the knowledge and skills they will need to fill the exciting new posts being created around the Thames – not least at the port itself.

“By supporting local teachers and schools through the awards scheme we are maintaining a proud record of investment in the education and skills of local people.”

You can find out more – including the forms to nominate someone you believe deserves recognition – at https://www.thurrock.gov.uk/education-awards

Nominations close on 19 September with the winners announced on 28 November at an evening ceremony at High House Production Park in Purfleet.