Man rushed to hospital after being stabbed outside Grays railway station

A MAN was rushed to hospital after being stabbed outside Grays Railway Station.

Police were called to the station at just after 3.30pm this afternoon (Wed).

On arrival, they found a 35-year-old male had been stabbed in the back and shoulders.

The male was assessed by paramedics from the air ambulance and a ground crew.

He was transferred by land to a London hospital where his injuries are being assessed.

Police appeal:
Serious incident near the train station at Grays. Please bear with us and don’t cross the cordons.

YT understands that there has been an incident near to Grays railway station.

The air ambulance has landed on the small patch of land next to St Peter’s church. 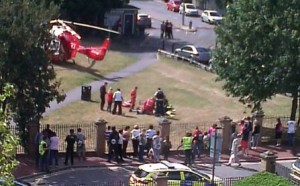