SACHA Baron Cohen has been out and about in a transformed Tilbury – shooting scenes for his new film.

The actor, known for playing Borat and Ali G, was filming Grimsby in Dock Road 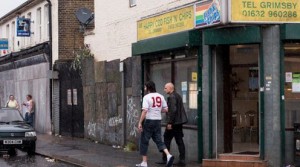 It is due for release in September 2015.

One Response to "Sacha Baron-Cohen takes Grimsby to Tilbury"