YT has known Veronica Briones Wilde for several years. The fitness guru is one of those enthusiastic, no-nonsense, genuine human beings that frankly makes us sick. Anyone, who has been part of her dance groups, gym classes etc will attest to that.

So, a few weeks ago, we learned that the Ockendon mother-of-two’s husband, Phil, had been diagnosed with testicular cancer. However, anyone who knows Phil, knows that he is not going to take this lying down but at the same time, he wanted to get a message out there to the men of Thurrock about the challenges of cancer.

So, here is the first blog from Phil Wilde as he takes us on his journey as he battles cancer. His advice may be somewhat direct but think about the alternative.

I’m 31, fairly typical- beautiful wife and two gorgeous daughters. I’m in shape, I look healthy- I run, I circuit train and from time to time I shift some weight. I eat well 90-ish% of the time. And yet this month, I learned that I’ve got a bit of testicular cancer.

What’s been great about this week is just how many lessons I’ve had in such a short period of time.

Cancer is a taboo for a lot of people- so far, my experience is that “The Big C” ain’t as big as it was. It doesn’t need to be a secret and it isn’t bad news if it’s treatable. It’s just another illness.

Some things I’ve had no option but to accept this week. So, I’ve focused on what I can control. My response and my perception of what’s going on. It’s been strangely empowering.

I lose one of the dynamic duo and soon after I find out how much chemo I’ll need. Just ab 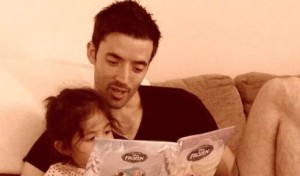 out gettin’ it done from here.

We will catch up with Phil next week.