EIGHT men have today been jailed for seven years after pleaded guilty to stealing watches and jewellery worth nearly £2m from a jewellery store in Thurrock.

The gang struck at the Ernest Jones shop at Lakeside shopping centre in the early hours of Saturday, April 12.

As the thieves fled on foot with their haul they set fire to a number of road blocks made from tyres in an apparent attempt to distract or impede the police response. A parked police car was also set on fire with a petrol bomb.

But they were foiled when they were tracked by a police dog and handler who followed the gang’s trail up an embankment and along the railway to South Ockendon where all eight were later arrested.

Officers obtained further evidence when a member of the public handed in a holdall containing jewellery worth around £500,000 stolen from the Lakeside store. The bag was found in a garden at South Ockendon on Sunday May 18.

The eight men, all Romanian nationals, pleaded guilty to aggravated burglary when they appeared at Basildon Crown Court today, Thursday July 17. The judge sentenced them immediately and they were each given seven years for the offence.

DCI Stuart Smith, who led the investigation, said: “This was a well-planned and highly-organised attack on an iconic site in the South East of England. The use of burning barricades and setting fire to a parked police vehicle, unprecedented in Essex, were intended to hinder the police response and intimidate officers attending.

“Not only did officers attend the incident immediately the response was so well co-ordinated that the very confusing dynamics were quickly assessed and a search commenced.

“An excellent response by force assets led to dog handler Pc Mick Finch and his dog Cody finding the direction that the suspects made off in and he commenced the pursuit down the railway lines to South Ockendon with mobile units being moved ahead of him in order to cut off the fleeing suspects.

“Whilst in full flight the suspects went down streets and across gardens in order to escape the pursuing officers. However the residents of Ockendon assisted us greatly by not only calling us in relation to the disturbances but also by checking their gardens for suspects and property.

“Local officers, with the assistance of county resources and the police helicopter, managed to capture all the suspects and recover a large amount of property due to their assistance.

“A few weeks later, a local resident found in his garden a bag which contained the remaining jewellery that had been stolen. This was a fantastic act and that individual, who wishes to remain anonymous, truly showed great public spirit and honesty.

“Essex Police has a dedicated CID team overnight led by a Detective Inspector and they co-ordinated the initial investigative response and evidential capture. They were soon supported by officers from the Kent and Essex Serious Crime Directorate who took over the investigation.

“This was a complex investigation for investigators and crime scene officers due to the number of scenes and suspects arrested. This is the type of serious and fast-moving incident that the SCD was created to deal with and within 36 hours the full evidential picture had been captured.

“Then, with the support of our colleagues in the CPS, all eight men were charged and remanded into custody. 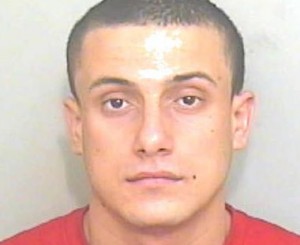 “Whether they are European criminals or home-grown, I hope that the hugely professional and co-ordinated response of Essex police and the Serious Crime Directorate together with the sentences handed out will show similar like-minded criminals that committing serious crime in Essex and Kent can only end one way.”

One Response to "Result! Eight jailed for seven years each over failed Lakeside heist"