Football: Dockers start off their pre-season 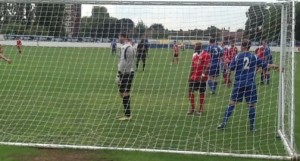 ON a warm afternoon at Lodge Avenue, Tilbury started there pre season with a 1-1 draw against an experienced Barking side. Two first half goals saw the sides share the Peter Webster Trophy for the second successive year.

The onlookers in attendance would have seen a less than friendly first half with the game littered with fouls. Tilbury had the better of the chances in the opening period. Joe Christou shot at the keeper on 25 before a minute later Jack West being denied by the crossbar

On 35 The Dockers took the lead when Jack West hit home left footed from a 20 yards free kick with the keeper unmoved.

Jack West again went close on 39 when good work from Babalola found him in space, but hit just wide. In a lively end to the half Foster for the home side hit the bar, before Jake Pooley cleared to safety.

Just before the break, Barking equalised when they were awarded a free kick on the edge of the box and Luke Stanley hit a fine effort passed Dean Driscoll.

On the hour Barking had a good chance only to see Driscoll make a fine save. Chas Liddiard had a good effort for the home side on 62 when he blazed over from 8 yards.
Both sides retained the ball for long periods after the break, with a final minute effort from Harry Cook striking the bar.

After the game manager Paul Vaughan said he was happy with first outing of the season. It was good to see some good performances from the established players and the trialists.

After the game Captains Ben O’Brien and Aaron Waters are presented with the Peter Webster Trophy from Life Vice President Ron Debenham.

A young Tilbury side travelled to James Hornsby school on their 3G pitch and put in a good performance to beat Mid Essex side Laindon Orient.

The home side scored 5 minutes before the break when Blackburn’s effort took a deflection past George Ryan in the Tilbury goal.

The young Dockers side improved after the break and equalised on 65 when Robbie Ryan scored before scoring the winner eight minutes later when trialist Rodney Wilson fired home.

After the game manager James Imber commented. “A very pleasing result with a number of young players on show who won the Essex Cup last season with a blend of more experienced players. To beat a side like Laindon Orient is pleasing as they are a well equipped club run extremely well. A tough side who would hold there own in the Essex Olympian league.