Plot to smuggle 6,000 litres of booze into UK foiled at port of Tilbury

AN attempt to smuggle almost 6,000 litres of Nigerian spirits into the UK – which would have cost the Government more than £68,000 in lost revenue – has been stopped by Border Force officers at the Port of Tilbury.

Had the smuggling attempt proved successful it could have cost the Treasury approximately £68,800 in unpaid duty.

“This was an excellent detection. By stopping the shipment we have starved those responsible of the proceeds of their criminality.

“We will continue to work hard to tackle criminals out to make a profit by cheating British tax payers and undercutting honest local traders.”

No arrests have yet been made.

Border Force officers are the front line in protecting the country and play a key role in detecting illegal immigration, disrupting serious and organised crime and helping to prevent the threat of terrorism. Border Force also protects the UK’s revenue, contributing to the nation’s prosperity and growth. 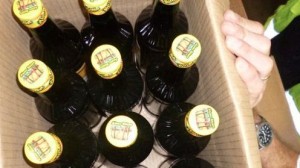 They use an array of search techniques including sniffer dogs, carbon dioxide detectors, heartbeat monitors and scanners – as well as visual searches – to find well-hidden stowaways, illegal drugs, firearms and tobacco which would otherwise end up causing harm to local people, businesses and communities.

Anyone with information about activity they suspect may be linked to smuggling can call our hotline on 0800 59 5000.