A MOBILE phone app which explains the history and wildlife of a new 29-mile footpath along the Thames Estuary linking Tilbury to Leigh-on-Sea has just been launched.

Cllr Howard said: “I take great pride in the fact that Essex County Council has focused resources in this part of the world. The County Council is working with all our partners from unitary and district authorities and voluntary sector partners to breathe new life in to the estuary.”

The footpath connects some of Essex’s most important marshes in Tilbury, Corringham, Fobbing, Vange, Bowers Marsh and Hadleigh.

Essex County Council co-ordinated the creation of the path, which is supported by a dedicated website, www.thamesestuarypath.co.uk, and a mobile phone app which has videos, audios and text explaining in detail these fascinating marshes.

A map of the path is available at the Thurrock Thameside Nature Park, Wat Tyler Visitor Centre and local libraries.

The path was funded by partners include Veolia North Thames Trust, the MaxiGreen project and an EU Interreg Two Seas project.

Cllr John Jowers, Essex County Council Cabinet Member for Communities, Libraries and Planning, said: “In the last six years we have secured £9.8 million of funding to improve the Thames Estuary, by working hard with our partners.

“We have been involved with improvements to landscaping and the creation of nature reserves. This area is a fantastic place for people to visit – and not just people living in south Essex.”

It is an area of incredible history, particularly military history, as the Thames has been defended over the past 2,000 years. The path connects Tilbury Fort, Coal House Fort, Wat Tyler Country Park, a former munitions factory and Hadleigh Castle.

There are also many first and second world war pillboxes, anti-aircraft emplacements and secret radar stations throughout the marshes.

The path also visits some recent developments of the Thames, like the London Gateway port next to the site, travelling along a new bridleway with a view of new wetlands. 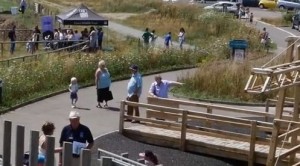