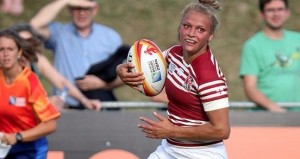 ENGLAND, the beaten finalists in the last three women’s World Cups, made their anticipated winning start in Marcoussis but the 12th-minute dismissal of the Samoa full-back, Soteria Pulumu, for a dangerous tackle denied them a more meaningful workout with the ball in hand before the greater challenges to come.

England scored 10 tries but were too often tactically uncertain, at their most threatening when Samoa were in possession, and they conceded 16 penalties in a match they had secured long before the interval.

Samoa rattled England in the opening 10 minutes with an overtly physical approach to compensate for their relative lack of experience and fitness, but it cost the islanders when Pulumu was sent off for a reckless tackle on the scrum-half Natasha Hunt following a break by Katy Mclean.

Pulumu, the last line of defence in her 22, lifted up Hunt and dropped her head first, leaving the referee, Amy Perrett, with no option but to reach for the red card. Emily Scarratt turned the penalty into three points and Samoa’s resistance started to fracture.

The wing Katherine Merchant scored England’s first try on 18 minutes, beating four defenders on a run from the halfway line, and less than three minutes later she scored her 43rd international try in 55 appearances, finishing off a move she started in her own half.

It was only the 19th Test in the Manusina’s history and they had to hold fund-raising dinners to be able to afford to fly to France and take part in the finals. They had only played five matches since the 2010 World Cup, which they did not take part in, while England were looking to make the final for the fourth successive tournament and their starting line-up had 779 caps.

A spate of penalties slowed England’s momentum and Bello Milo was a few metres short with a long-range kick as Samoa got on top at the breakdown. England, though, were as threatening in their own 22 as they were in their opponents’ and when the No8 Heather Collins, one of three sisters of the former New Zealand back-row Jerry Collins in the Samoa side, lost possession Lydia Thompson sprinted 75 metres to score.

Two penalties led to the final two tries of the half for England, Thompson scoring her second to secure the bonus point after the ball was moved along the line before Hunt tapped and ran from just outside her own 22 to make it 34-0 at the interval.

Samoa started the second-half strongly, Milo narrowly wide with a 40-metre drop goal after the tee failed to arrive in time as she waited to take a penalty, but discipline again cost them when Collins was sent to the sin-bin on 49 minutes, although England had been fortunate that persistent offending at the breakdown had not resulted in a yellow card.

England struggled to break down the 13-strong defence before Hunt and Kay Wilson scored. La Toya Mason and Scarratt took advantage of weary defenders before Milo’s penalty after Marlie Packer had been sent to the sin-bin got Samoa on the scoreboard. England, though, had the final say through Wilson.