SOUTH BASILDON and East Thurrock candidate, Mike Le-Surf has praised Ed Miliband as he warns that commuters could face fare rises of up to 5.6 per cent next year. This is on top of inflation busting fare rises of nearly 20 per cent since David Cameron came to power. He calls on the Government to adopt Labour’s policy of capping annual fare rises on every route to take the pressure off commuters in Basildon and Thurrock next year.

Mr. Miliband said: “David Cameron has failed hard-pressed commuters – who are already struggling due to the cost-of-living crisis – by allowing fares to rise by 20 per cent since he came to power. A Labour government would cap annual fares on every route and drive through the biggest reforms of the railways since privatisation.”

Mike Le-Surf said: “These are exactly the kind of new proposals that commuters want to see. I travel to London by train during the week and easing the pressure on fare payers by passing savings from reforms on, capping annual fare rises on every route, simplifying fare structures and creating a new legal right to the cheapest tickets will help residents in South Basildon and East Thurrock who have suffered a great deal over the past four years under this Tory led coalition.” 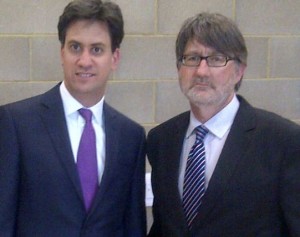 Labour plans to reform the railways to get a better deal for taxpayers and passengers by:

· Reviewing the Government’s failed franchising process as a priority, after the chaos of recent years, to safeguard taxpayer and passenger interests;

· Legislating to allow a public sector operator to be able to take on lines and challenge the train operators on a genuine level playing field to secure value for money for passengers and taxpayers;

· Building cooperative principles into the railways to ensure that passenger and employee involvement is increased, including encouraging new mutuals and co-operatives into the industry;

· Devolving decisions over the running of regional and local services so that areas can bring together trains, buses, trams into a single network;

· Creating a new guiding mind for the railways, bringing Network Rail together with a new representative passenger rail body to contract routes, co-ordinate services and skills in the industry, oversee stations, fares and ticketing, and ensure customer satisfaction across the network;