THE End Child Poverty coalition has today published new figures providing a new Child Poverty map of the UK. There are more than 3 and a half million children living in poverty in the UK, and the new figures reveal that whilst child poverty exists in every part of the country, as many as 47% of children are living in poverty in some areas – compared to one in ten in others.

The number of children living in poverty in Tilbury is over 41%. In Corringham it is 26%. In Orsett it is 11%.

The coalition of charities, faith groups and unions is warning that the benefits freeze in place until the end of the decade will mean that as prices rise, low income families will find it increasingly hard to pay for the same basic essentials.

End Child Poverty is calling on the Government to use the upcoming Autumn Statement to end the freeze on children’s benefits, and to reverse the sharp cuts being introduced to in-work benefits under Universal Credit. 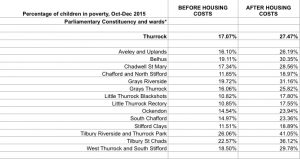