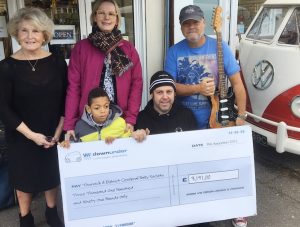 YOUNGSTERS at a Thurrock-based charity have been boosted by generous party-goers and the efforts of a local firm and musicians.
Thurrock & District Cerebral Palsy Society’s shop in Lampits Hill, Corringham, which is also the base for the Kids First charity which supports a school where parents and children with cerebral palsy learn together in a fun and supportive environment, played host to a presentation ceremony.

Paul Mullinger, owner of Fobbing-based Volkswagen camper specialist VW Down Under, was on hand to present more than £3,000 which was handed over to special needs pupil Jacob Hope, Kids First founder Carole Day and teacher (specialist conductor) Ildeko Toth.
VW Down Under has been selling and restoring the iconic VW camper vans for more than 15 years – and started supporting the charity three years ago. Mr Mullinger explained: “I was looking for a local charity to support and when I walked into the shop and school I was blown away by all their hard work.

“So we organised a fundraising barbecue and party at out yard in Fobbing and raised £500. The second year we raised £1,200 and this year £3,191. We were helped by ‘John and the Beagles from Basildon Recording Studios who helped us create a fantastic party. We had a bouncy castle for the kids, an open barbecue and everyone had a great time.

“We had people bringing their campers from as far away as Paris and even though it rained it was an amazing day for an amazing cause.”
And Mr Mullinger, whose firm is featured on website www.vwdownunder.co.uk, promised more to come, adding: “Next year will be bigger and better.”