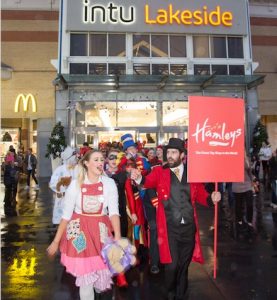 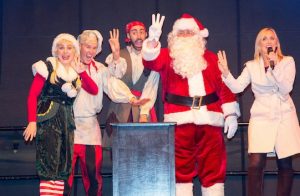 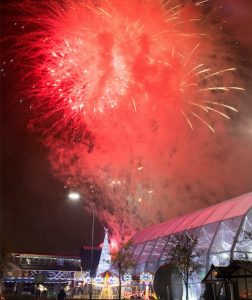 The event kicked off at 4.15pm with an exciting parade led by amazing characters from Hamleys along with other retailers including Build-A-Bear, Nando’s, House of Fraser, Partido and Menchie’s as well as local students from Jesters Theatre Academy and performers from the Thurrock Marching Brass. Visitors followed the parade to the Christmas Village which is located in car park 3.

Lots of familiar faces such as Cook and Line from CBeebies were at the Christmas Village to greet the guests as they arrived and got everyone laughing as they took to the stage with their entertaining songs and knockabout jokes!

With spirits high and lots of singing, dancing and laughing, visitors to the Christmas Village soon saw the most familiar face of all, the big man himself- Santa Claus! Santa arrived to make the evening even more spectacular and with the crowds full of excitement, he flicked the big switch which saw people stunned as fireworks illuminated the Christmas Village before their eyes.

But the fun didn’t end there, after the lights spectacular the laughs and joy carried on through the night in the Christmas Village where guests enjoyed German Market Stalls and had the chance to skate at intu Lakeside’s first ever ice rink.

Ben Leeson, Marketing Manager at intu Lakeside commented “Our Christmas lights switch on was a great success with lots of festive cheer spreading and Christmas fun flowing. There was a great turn out to launch the Christmas season at the centre and our new Christmas Village. We have no doubt that this Christmas is set to be bigger and better than ever before at intu Lakeside.”