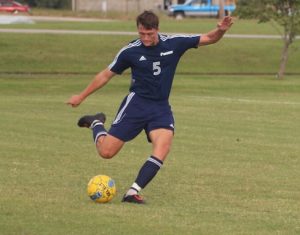 A FORMER Sports student from South Essex College is now playing football in America for a top college team.

Connor Summerhill, 18, studied Level 3 Sport and Exercise Science at the Southend Campus and played for the College football team before moving to St Louis, Missouri to take a place on a scholarship programme.

He plays centre back for St Louis Community College’s team, the Archers. They won their regular season and the Region XVI Championships plus Connor was named in the Missouri Community College Athletic Conference first team.

Connor said: “It felt very good to win all those competitions, it has been the best season the college has ever had.”

The scholarship programme is a two year course in which Connor gets to play his sport and study at the same time.

He said: “South Essex College made sure we knew all about the scholarship opportunities available to us in the US. I decided it was something I would really like to do.

“My ultimate goal is to play for a Major League Soccer team in America. I want to go to a University out here next and play for their soccer team which will hopefully get me into the MLS draft.”

Connor lives in St Louis with three other English boys and just like being at university in the UK, they have had to learn to fend for themselves.

He added: “Everything is more intense here. The college side of things is very important. I need to keep focused on my studies and get good grades or I could be sent home. I need to be responsible for getting the balance right between social life, playing football and studying.

“Even the football is more intense with training every day and two to three matches each week because the season is spread over just a couple of months.”

Lewis Dallas, Football Academy Course Leader at South Essex College, said: “Our job is to help our students progress and chase their dreams. Every year we arrange scholarship talks with a number of companies who come in and speak to students about athletic scholarships in America. Connor is doing very well in the US, everyone in the Sports department is very proud of his achievements.”

For more information about the Sport courses at South Essex College, visit www.southessex.ac.uk