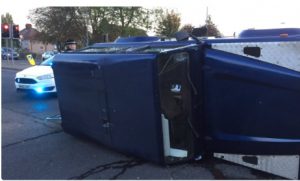 A TEENAGER who stole a vehicle, took it on a high speed police chase before crashing into another car and putting the driver in hospital has walked free from court.

The seventeen-year-old from Grays, who cannot be named for legal reasons appeared at Basildon Magistrates Court.

They were charged with the following.

On 11/11/2016 at GRAYS used a motor vehicle, namely LAND ROVER 90 on a road, or other public place, namely HATHAWAY ROAD,LODGE LANE, when there was not in force in relation to that use such a policy of insurance or such a security in respect of third party risks as complied with the requirement

On 11/11/2016 at GRAYS, being the driver of a mechanically propelled vehicle, namely LAND ROVER 90, on a road, namely HATHAWAY ROAD,LODGE LANE, failed to stop the vehicle on being required to do so by a constable in uniform

On 11/11/2016 at Grays, without the consent of the owner or other lawful authority, took a mechanically propelled vehicle, namely Land Rover, for the use of yourself or another and after the vehicle was unlawfully taken and before it was recovered, the vehicle was driven dangerously on a road, namely Arterial Road West Thurrock. Additional aggravating factors were and a collision occured causing injury.

A youth rehabilitation order was made, he was placed under curfew for three months and the teenager was fined £105.