CCTV released after theft of watches from Emson Haig at Lakeside 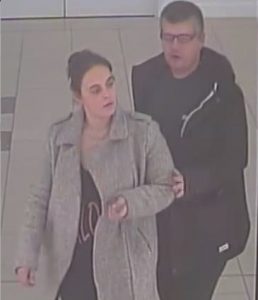 ESSEX POLICE, investigating the theft of three watches from a jewellery shop, have released CCTV images of two people they would like to trace.

The incident happened at the Emson Haig shop at the Intu Lakeside Shopping Centre at Thurrock on Tuesday November 15.

Suspects walked into the store, forced open a display cabinet and removed three watches before leaving.

Police are investigating the theft and would like to trace the man and woman shown in the CCTV image.

Witnesses to the incident, or anyone who recognises the man and woman, can contact PC Glen Foote on 101 or Crimestoppers anonymously on 0800 555 111.