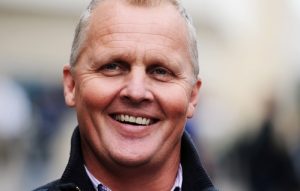 ONE of Britain’s most-loved motor racing drivers, Johnny Herbert, is heading to intu Lakeside for a book signing at WHSmith. Signing copies of his new autobiography ‘What Doesn’t Kill You’, Johnny will be at the centre on Friday 2 December from 12.30pm onwards.

Johnny’s humorous autobiography brings to life all aspects of his career including the excitement of his life behind the wheel. He also shares a wealth of stories from his career in Formula 1, involving familiar names such as Michael Schumacher, Ayrton Senna, Alain Prost, and fellow drivers such as Damon Hill, Marton Brundle and Nigel Mansell.

Ben Leeson, Marketing Manager at intu Lakeside comments “We’re really excited to welcome motor racing star Johnny Herbert to the WHSmith store at intu Lakeside. Over the years, Johnny has gained legions of fans as a result of his high profile racing career, and we’re certain that his book signing will draw crowds from all over Essex to the centre. We can’t wait to hear all the exhilarating tales from his successful career and we’re looking forward to offering our visitors the chance to meet the F1 star.”

Johnny has had a long and varied career from winning British Junior Karting championship and losing part of a finger in the process, to a career threatening crash.

Copies of the book must be purchased from WHSmith and customers are advised to arrive early to avoid disappointment.