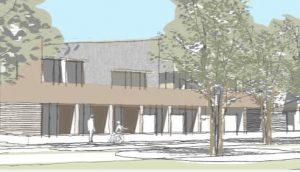 AFTER the ‘hype’ surrounding such events as ‘Black Friday’ and ‘Cyber Monday’ the digital world has come together to promote a positive day – ‘#GivingTuesday’. On Tuesday, 29 November St Luke’s Hospice will be at the forefront calling on local people to hit their phones, laptops and computers to make it a day to remember.

Hospice fundraiser Anita Pease explained ‘’ The Aim of #GivingTuesday is to encourage a global day of giving back to celebrate kindness and generosity. The day itself falls on the Tuesday after ‘Black Friday’ and ‘Cyber Monday’ each year – which this year is 29th November – so just in the same way ‘Black Friday’ and ‘ Cyber Monday’ kick off the buying season #GivingTuesday aims to kick off the giving season – it’s a day to step back from commercialism and give something back’’.

Anita continued ‘’on #GivingTuesday we are aiming to raise £15,000 which is the amount it costs to keep Hospice services running for 24 hours. On November 29th Hospice fundraisers, supporters and volunteers will be spreading the word through social media, local press Town Centres and train stations asking people to donate. Everyone can join in and we would be delighted to hear from anyone who would like to help and get involved’’

Reminding everyone to get ‘#GivingTuesday’ in their diaries, will be Civic Dignitaries Cllr David Harrison (Mayor of Basildon), Cllr Cathy Kent, (Mayor of Thurrock), Mo Larkin (Deputy. Lieutenant of Essex), Stephen Metcalfe (MP), Billericay Town Crier Jim Shrubb and local celebrity and Hospice supporter Scott Robinson who will be coming together at the Hospice on 22nd November, with Hospice staff and patients.

Scott Robinson member of the ‘boy band 5’ said ‘’ whenever I visit the Hospice I am always amazed by the work they do – I will be backing them all the way through my social media contacts. It would be really helpful and make a great difference if, on November 29th, you could also help spread the word by sending out and passing on any messages you receive through social media, or on-line spreading the #GivingTuesday message, following them on fbook and directing people to the Hospices website,www.stlukeshospice.com; or encouraging them to text LUKE01 to 70070 and helping the Hospice raise 1 day’s running costs’’
——————————————————————-