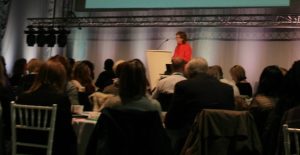 Professor Alexis Jay discussed the work the panel is conducting as well as her experience with other inquiries, including child sexual exploitation in Rotherham.

The conference was hosted by Thurrock Community Safety Partnership and NELFT (North East London NHS Foundation Trust) and aimed to raise awareness of violence against women and girls across professionals from social care, health, schools, police and public protection.

Portfolio Holder for Neighbourhoods, Cllr Sue MacPherson, opened the conference and told attendees: “This is something of a curtain-raising as Thurrock kicks off ‘16 Days of Action’ against domestic violence starting which starts on 25 November.

“This is a vital part of the work of the Community Safety Partnership here in Thurrock and supports two of its key priorities: Reduce youth offending and re-offending of adults and young people and; Reduce harm to and safeguard vulnerable victims.

“Although this event is billed as awareness raising, this on its own is only half the battle. Not only do we need to make sure our front-line staff understand the sorts of issues we will be discussing here today, but even more importantly, they need to understand what their response and actions need to be.”

Speaking after the conference, Professor Jay said: “It was a pleasure to address a room full of committed individuals drawn from front-line professions in social care, health, schools, police and public protection. I understand a lot of the problems they face, both professionally and financially and I was honoured to be able to exchange ideas with them on the topic of Violence Against Women and Girls.

“The Independent Inquiry into Child Sexual Abuse has much to thank them for in their day to day work and I look forward to continuing the dialogue with them as we progress.”