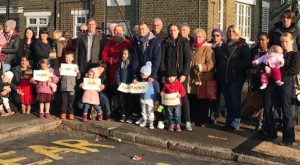 Gathering outside the Stanford-le-Hope Children’s Centre, a large demonstration was held calling on Thurrock’s Conservatives to halt their plans.

Four Children’s Centres have been earmarked for closure under the current Conservative administration: Aveley, Beacon (Chafford Hundred), East Tilbury and Stanford-le-Hope. All would close in April under the proposals.

Organising the protest and Labour’s campaign against the closures, Councillor Oliver Gerrish said: “These sweeping closures are going to be very damaging to Thurrock’s communities. I don’t think the council has realised how angry people are about these closures. The centres really are so important to Thurrock parents. It’s not just the physical building; it’s the great staff, the vital services offered and the invaluable support networks that are created. An outreach rather than universal model would mean most of these services are lost.”

He continued, “We are committed to opposing these Tory cuts across the borough and will keep fighting to try and stop them. Everyone in the borough can help with this – go to the Council consultation and let them know we can’t lose our Children’s Centres.”

Organising Stanford parents was local mum Sally Felton. She has started a petition against the Stanford-le-Hope closure which has already attracted over 350 signatures.

Sally said, “The petition to save Stanford-le-Hope Children’s Centre has had a lot of support, it is such an important part of the community and I have had so many comments from families it has helped. I think there is a misconception that some areas need Children’s Centres more, but actually all parents are dealing with a whole range of issues regardless of their location or income, from postnatal depression through to terrible twos! Having a centre with trained staff, available 5 days a week, who are able to offer support and advice is so important and it is making a real difference.

“It’s such an excellent resource, from being able to drop in to Open Playroom sessions and make use of toys and facilities you don’t have at home, helping little ones develop social skills and meeting other parents at Stay and Plays,  through to courses like Children’s First Aid or Baby Massage. It won’t be possible to run this service effectively without having a dedicated centre.”

Stanford parents outraged by the closures

Other local parents also gave their reactions to the closures after the protest.
Vicki Salvage said “They can’t close it, it would be too sad. The work they do – outreach just won’t work. How will you meet mums in the area in future?”

Rachel Wraight said “We’ve made so many friends from coming to the Children’s Centre. It would be a tragedy for it to close. The staff are just so wonderful.”

Tracey Nellis said “The centre saved me from ante-natal depression as a new mum, this isn’t the sort of place that we can afford to lose.”

Finally, young Sophie Taylor, aged just 3, who thinks of the Children’s Centre as her school and loves her time there, simply begged “please don’t close my school”.

Wednesday night’s council sees a motion brought by Cllr Gerrish that asks the Tory administration to change their minds.

Cllr Gerrish said: “The role of a strong opposition group on council is to point out when the ruling party have got something wrong and should think again. We need robust scrutiny of the new administration’s plans, and I’m determined to deliver that.

“We are not saying that there should never be any savings – the scale of Government cuts to Thurrock funding may make that impossible. However, what’s proposed here is civic vandalism on an industrial scale – this is the wholesale closure of Children’s Centres across a vast proportion of the borough. The Tory plan goes too far, and we need to be united in rejecting it.”

Councillor Bukky Okunade, Chair of the Children’s Services Overview and Scrutiny committee speaking at the protest this weekend said: “The process being carried out by the Tory council is completely insufficient.

When papers about the future of Children’s Centres came in front of my committee for review, there was not a single mention of the fact that these centres were earmarked for closure. Then suddenly at Cabinet, there was a plan to close four of them. We needed an open process to design the future of the service, not a stitch up. I would encourage everybody to take part in the consultation so that we can stop these horrendous cuts.”