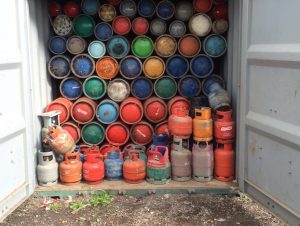 FLOGAS Britain, one of the UK’s leading liquefied petroleum gas (LPG) suppliers, has been involved in a multi-agency raid to stem the theft of empty LPG cylinders.

Eight different agencies were involved in the raid, which took place at Green Store self-storage, at Baldwins Farm just outside South Ockendon, where the thieves had stored over 400 cylinders in shipping containers, ready for export.

The agencies involved included the Environment Agency (who led the raid), police, fire service, Customs & Excise, immigration, the Health & Safety Executive and the Vehicle and Operator Services agency, which shows the lengths both the authorities and private companies will go to curb the theft of gas cylinders.

The cylinders, which are attractive to metal thieves because they can be sold across Europe for scrap metal value, had a replacement value of almost £25,000, but authorities also recovered stolen vehicles worth around £175,000 during the operation.

The eventual victims of these crimes aren’t the gas companies, but customers, as the thefts initially result in fewer cylinders available to those who rely on LPG to heat their homes or run their businesses.

However, it isn’t just the financial cost or loss of cylinders that concerns Flogas and the authorities, the cylinder also pose a safety risk if not handled correctly. LPG cylinders are completely safe under normal usage and handling conditions. However, if subjected to intense heat or major damage – conditions which could occur during their illegal storage and transportation – there is a risk of them exploding, causing a concern for public safety.

Pete Eccles, Asset Manager at Flogas Britain, said: “We will always take a very proactive stance on cylinder theft so we can protect winter supplies for our customers. We’re watching several people or organisations at any one time, and will always work with other LPG gas suppliers and the authorities to track down metal thieves, and prosecute them. There will no doubt be further raids during the coming weeks and months.”