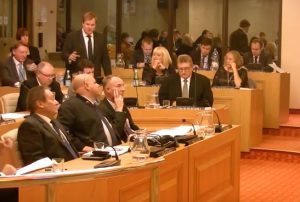 WELL over an hour of Thurrock Council’s meeting on Wednesday night was dedicated to the issue of children’s centres in Thurrock.

At the moment, there is a consultation on the future of a large number of the centres.

On Wednesday night, members of the public asked a series of questions to the portfolio holder, cllr James Halden.

That was followed by a motion put foreword by the Thurrock Labour group.