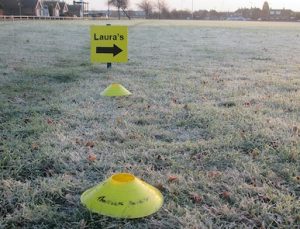 THURROCK’S parkrun on Saturday, was dedicated to Laura Mann (nee Flood) who passed away peacefully on 2 November 2016.

Organiser, Trevor Rawson said: “We were honoured to have many of Laura’s close family and friends join us in addition to our regulars, new parkrunners and tourists. With those who walked/run one lap and volunteers we numbered well over 100, our largest turnout since we began. We asked for the colours of Lavender/purple or anything bright and volunteers were on hand with ribbons.

“After the mandatory run briefing we celebrated Laura’s life with one-minute of applause. The run was started by a countdown of 3-2-1 and a big shout of “Laura”.

“Laura battled illness after diagnosis in 2013. She did this with the heart of a warrior and lots of smiles. I met her in June 2014 when it looked like the illness was defeated, Laura was looking to improve her fitness and determined to take responsibility for her health. I took her through foundation fitness and then she joined energetic dance based groups with Miche P Heine and Heidi Button. Many of her friends from these groups joined us and such was her inspiration an annual award for has been dedicated in her name by Fit4Life.

“Just one-year later and 4-stone lighter Laura joined my couch to 5km programme. She began parkrunning at Basildon in August 2015 with a time of 37:21 and went on to reduce her PB by 3:06-secs before she had to stop running at our event number-6 in November 2015.