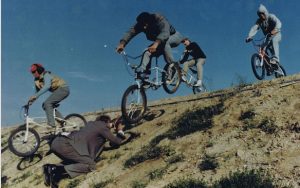 Built in 1978 The Rom is the finest example of an original 1970’s skatepark in existence and as such Thurrock based film maker Matt Harris has been working for the past 12 months on putting together a feature length documentary about the park.

“I was bought up in Grays and for my generation Rom was hallowed ground.

This was the early 80’s when BMX had just been introduced to the world via the movie ET and so Rom naturally became a BMX’ers utopia for us. Thurrock had a couple of poorly designed skateparks, in Bridge Road and South Ockendon, which would be swamped every weekend by local kids, but they were nothing compared to Rom.

Around 1983 Skateboarding had died off but for BMX’ers in Thurrock Rom was the place everyone wanted to go. There was a really strong local BMX scene and we’d spend every waking minute living and breathing BMX, I’d spend every daylight hour of the summer holidays with other local Thurrock BMX legends Stefan Woodcraft, Mark Baines, Keeny, Nick Hammersley, Dave Giller, Smithy and Daisy amongst many others pulling wheelies and tricks in the old chalk pits (where Chafford Hundred is now) and of course every street in the borough.

If the sun was out, the roads of Grays would be full of BMX’ers reliving that ET moment.

But I challenge you to find any boy who grew up in Grays in the 80’s who hadn’t been to Rom or at least knew of it’s legendary status.

But to be fair it wasn’t just Grays, everyone in Essex was drawn to this amazing place and for the generations who grew up with skateboarding in the 70’s and BMX in the 80’s it really is one of the most unique environments in the world.

I visited in the summer of 2015 again with my 6 year old daughter after a 35 year break and couldn’t believe that not only was the place still open but that also a lot of the users where the original skaters and BMX riders who had never left now in their 40’s and 50’s.

I then found out the place has this preservation order (Grade 2 listed) and is the only skatepark in the world to have this. As such it will be there for many more generations to come and so I thought there must be a great story in this somewhere !

The more I dug around the more I’ve found this amazing passion for Rom and without exception everyone has been more than willing in helping me to get this story out by supporting me with interviews and archive footage and photography. I still have a huge amount of work to complete the film for the parks 40th anniversary in 2018 including some planned interviews with some legendary old school guys now living in the US.

….And by a sheer touch of fate with the story going full circle, I even managed to get Californian legend Bob Haro, the originator of Freestyle BMX and one of the original stunt riders from the 1982 movie ET (he’s the one in the balaclava) interviewed for the film. (see pic below)

Anyone with a passion for The rom will also be able to get involved in the production as I will be running a crowd funding campaign in the new year with some really great incentives. Watch this space”