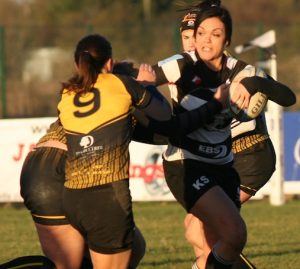 WITH top scorer Sally Tuson away playing in the Dubai 7s and a few more regulars missing resulting in a complete backline re-shuffle, this game against Wasps IIs was always going to be a tough gig.

Ts had the best of the opening exchanges, with Mercedes Foy hauled down just short by a despairing shirt grab and then held up from a forward drive in only 10 minutes, it seemed only a matter of time before Ts scored.

Unfortunately in the act of being held up, Prop Kara Hepper suffered a neck injury and there was a long delay while she received treatment and was removed from the pitch.

Still Ts kept up the pressure and all the first 25 minutes was played in the Wasps 22 but the Wasps defence held and Ts just could not get over the line.

Finally a penalty allowed Wasps some breathing space and an entry into Ts half of the pitch for the first time. Launching an attack from a 22m lineout, they split T’s makeshift defence and scored with their first attack of the game.

So it continued till half time, neither side could win their own lineout resulting in scrum after scrum with Ts looking more and more ragged as the makeshift front row came under pressure.

With a Wasp in the bin for a deliberate knock down, Ts started well and were quickly level with Captain Cook touching down almost under the posts, vitally she failed to convert her own try and the score remained 5-5.

Ts had the best of the next 10 minutes with repeated forays into Wasps territory, but Wasps put together a string of possession and once again T’s defence let them down and the resulting score under the posts was converted for 5-12.

Ts kept attacking and Edwards charged down a clearance to bring it to 10-12 but vitally Wasps scored next as Ts turned over good attacking ball for 10-17 with only 5 to go.

Deep into overtime with Ts playing phase after phase in nearly 5 minutes of unbroken play inside the Wasps 22, Sophie Tyler finally crashed over the line.

Captain Cook lined up the kick but failed to convert and Thurrock T-Birds lost their first Championship game at Oakfield in 5 seasons. 15-17 and drop to second in the table.

Hepper was checked out in hospital and suffered no lasting damage.

T-Birds are away to Cheltenham this Sunday 11th December at 2.15pm.

There will also be a special recruitment night on 12th December aimed at University Students, but anyone welcome.,