Blogpost: “If the BNP had put flags all over Thurrock……”

By Staff Reporter on December 7, 20168 Comments 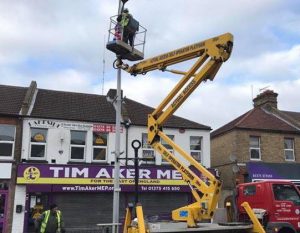 AN elderly lady who I have known for many years said to me at the weekend: “Why are all those flags flying in Grays, this is not good, the last time I saw something like that was when I was a young child.” I told her not to worry it was just a political party flexing its muscles. She looked at me in that quizzical way which people often do when they have experienced much in their long lives.

After I left her I thought about what she said and went down to Grays to take a look, I was shocked to see approximately 16 England and Union Jack flags flying from almost every lamp post in the heart of the town, and I immediately understood her fears.

She came to Britain on the Kindertransport, her parents were both German and lived in the Free City of Danzig. (now Gdańsk in Poland) In 1933, the City’s government was taken over by the local Nazi Party who expressed their patriotism to a greater Reich by hanging flags and pasting up offensive posters all over the city.

Eventually fearing the worst her father sent her to stay with an aunt in Aachen near the German-Dutch border, after Kristallnacht it was decided to send her and a cousin to Great Britain. She was lucky to be on one of the last ships to leave a Dutch port before the country was occupied, she never saw her parents or Aunt again, they perished in the Holocaust.

She loves this country greatly, why wouldn’t she it helped save her young life, she is far more patriotic than I, and when I was younger and more naive she used to tell me off when I turned up my nose at the Union Jack because of its association with British imperialism.

She understands better than most the damage patriotics displays can do when they get in the wrong hands. Thurrock is a multi racial society, like it or not we have people living here who have come from throughout the UK and the four corners of the world. I cannot help thinking those who put those flags up in Grays and elsewhere in the borough were sticking a finger up at those people.

This was basically what the Nazi party in Danzig were doing in the 1930s, the only real difference being their flags were aimed at the city’s Jewish population and we all know where that led…

Of course the Union flag should be displayed on Armistice day and on other ceremonial occasions, and I well understand why England supporters may wish to hoist their flag when their national team is playing, but do we really want these emblems being used as a political weapon. I hope not.

If it had been the BNP putting these flags up across the borough Thurrock Council would have ordered them to be taken down. I do not believe for a moment the overwhelming majority of Thurrock residents who voted for Ukip’s are bigots or racists, but with the election of Paul Nuttall the party does seem to be moving to the far right. I ask how would they feel if every time they turned a corner in one of Thurrock’s towns they saw a flag flying which was clearly aimed at them, and not in a nice way. Let us learn from history and leave such patriotic mockery where it belongs, in the past. I am not on principle against flying national flags, but if we do let them reflect the true diversity of the people who have made their homes in our borough.

8 Responses to "Blogpost: “If the BNP had put flags all over Thurrock……”"