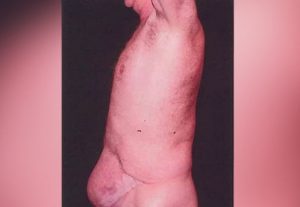 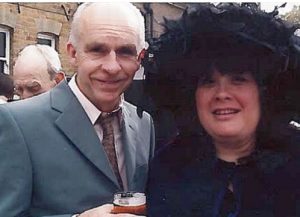 A CANCER patient who lost most of his penis to a flesh-eating superbug is taking legal action against the hospital where he was having treatment.

Andrew Lane, 61, contracted the infection necrotising fasciitis after an operation to have his prostate gland removed at Southend Hospital, Essex.

He claims his bowel was punctured during the procedure, leading to the infection.

The hospital said it was aware of the case but could not comment further.

Mr Lane, from Thurrock, had so much diseased tissue removed that he lost his penis and was left with a protruding stomach where the outer tissue was “eaten away”.

He had to use a catheter and colostomy bag for two years after the operation in 2013.

“It has just been a horrendous experience. I thought I was going to die,” Mr Lane said.

“That night I was taken to theatre three times while the surgeons took more and more tissue away.

“I was super-fit before all this. I had a good body, but now I look like I’m nine months pregnant. I can’t ever bear to look at myself naked.”

Nick Greaves, from Mr Lane’s lawyers Slater and Gordon, said: “Mr Lane believed he was going into hospital for a routine operation and would be home within days.

“Instead, he has been left with permanent and life-changing injuries that have turned his world upside down.

“Although nothing can change that, he wants to know what happened and ensure it is fully investigated and everything possible done to prevent anyone else having to go through the same ordeal.”