A NUMBER of protestors picketed outside Thurrock Council this morning in support of UKIP and their recent battle of the flags.

A photograph that appeared on social media showed six individuals holding three different flags. The union flag, the St George flag and what appears to be the flag of the Southeast Alliance.

The Southeast Alliance is a organisation that has been described as “angry, white and proud” and has been highly vocal and visible in a number of protests across the region alongside extent right wing organisations such as the National Front, Combat 18 and the English Defence League.

According to its Facebook page, the Southeast Alliance has given their total support to Thurrock UKIP’s campaign to keep the union and St George’s flags flying across the borough. However, Thurrock Council had begun to take the flags down on Monday morning. 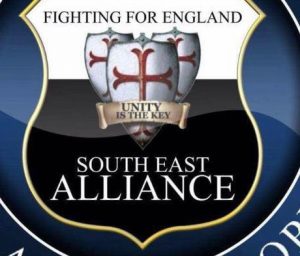