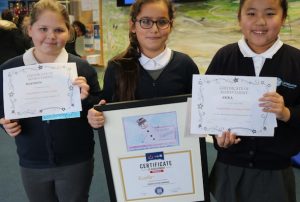 LANSDOWNE Primary Academy were recently in receipt of a very generous cheque of £500 from Griffin Estate Agents, as winners of this year’s Christmas Card competition!

The Academy encouraged its pupils to take part in the annual competition, which is hotly contested by Primary schools across Thurrock, and not only came first, but second and third too! Kaitlin took the top spot along with £50 Intu Lakeside vouchers to spend on whatever she wants, swiftly followed by Madison and Asika who proudly showed off their runner up certificates.

Kaitlin was presented with her design and a winning certificate in a specially bound frame, along with the knowledge that her design is Griffin Estate Agent’s official Christmas Card for this year!

Principal, Miss Monique Anderson, said “We are extremely grateful to Griffin Estate Agents for awarding us with £500. The pupils worked really hard on their Christmas Card designs and I am delighted that their hard work paid off!”

On behalf of Griffin Estate Agents, both Alan and Ashley said, “We were delighted to receive so many entries from across Thurrock this year and even more delighted to present Lansdowne Primary Academy with this cheque. The final decision on the top three were in the hands of 20 staff at Griffin’s, with Kaitlin’s a clear winner – we hope she enjoys spending her winnings!”