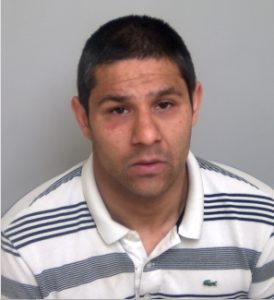 TWO brothers have been jailed for nearly 20 years for their part in supplying cocaine across the north of Essex.

Steven and Terry May were sentenced at Chelmsford Crown Court yesterday (Monday, December 12) following a five week trial. During week four, Terry May admitted two counts of conspiracy to supply Class A drugs on dates between December 2013 and April 2014. Steven May was found guilty of the same two counts by a jury.

Steven May, aged 42, of Wivenhoe Road in Alresford, Colchester, a director of Rosewood Car Sales in Marks Tey, was sentenced to 12 years in prison. Younger brother Terry aged 38 and unemployed, of Ottawa Road, Tilbury, was sentenced to nine years in prison. He was also received an 18 month sentence to run concurrently for possession of criminal property – £60,010 that was seized by police when he was arrested.

The pair were arrested and charged following an extensive operation carried out by the Serious and Organised Crime Unit, part of the Essex and Kent Serious Crime Directorate.

The operation had been running since December 2013 and was centred on the activities of an organised crime group operating within Colchester. The crime group supplied high purity cocaine to a network of dealers.

The head of this organisation was Steven May who used his brother as his trusted runner who actively collected and supplied controlled drugs in the area.

Following a covert police operation, officers executed warrants under Section 23 of the Misuse of Drugs Act 1971 on Wednesday, June 24 2015 at the home addresses of both and they were arrested.

They found sums of cash at Steve May’s home which he had tried to hide. Terry May attempted to run away from officers when they attended his home. He ran out of the house naked and was apprehended in the back garden. He tried to throw away a bag of cocaine but it was located by a drugs dog that was searching the house and the back garden.

DCI Stuart Smith led the investigation. He said: “This was an excellent result for my team who are committed to disrupting organised crime gangs and protecting the people of Essex. “Steven May gave the appearance that he was a respectable businessman whilst leaving his younger brother Terry May to do his dirty work.

“Essex is a safer place now these two have been jailed. The money seized under the Proceeds of Crime Act and will be used across policing to protect the people of the county.”

He added: “The officers worked hard over a long period of time on this investigation. Their efforts have been repaid by this result and those involved have been commended by the judge for their efforts.”