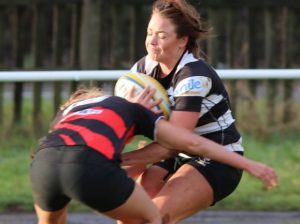 Cheltenham is always a difficult gig. Having denied the T-Birds promotion in their first playoff back in 2009, there is always a little spice in the fixture.

Three and a half hours on a coach is not the best preparation for a game of rugby and the team nearly always starts slowly.
So it was yet again. The defence in open play has been a little suspect this season, and with 2 players making their starting debut a small error allowed Cheltenham’s Weller to make the almost perfect start and cross the line in only 3 minutes.

As always, the T-Bird forwards rolled their proverbial sleeves up and got stuck in.
Second best in the scrum but winning the battle of the breakdown gave the backs clean ball and new starter Siobhan Longdon-Hughes (better known as Queenie) carried hard in the midfield to put Rebecca Prosser in at the corner to even the score.

The Thurrock backs looked very threatening and Tuson was hauled down short on a couple of occasions before she managed to outstrip the defence and put Ts ahead at 5-10.

Cheltenham responded by killing the ball at almost every ruck and tried to turn the game into an arm wrestle. Their dominance at scrum time was denying Ts any clean ball and finally 2 penalties put them in a good attacking position for them to change ends at half time level at 10-10.

Half time saw a very focussed discussion and a change of tactics to avoid the mess at the breakdown which quickly saw results.
Cleaner ball allowed Ts to create one of their purple patch 10 minute spells, so Tuson bagged her second and Tyler also got on the score sheet for 10-22.

Cheltenham fought back but had no answer to the T-Birds in full flow. Foy who had smashed holes all afternoon finally broke the line completely to put the game beyond doubt and claim the bonus point. 10-29.

Sally Tuson bagged her hat trick to put what should have been the final nail in the coffin at 80 minutes for 10-34.

Unfortunately the referee decided there was still time to play and despite having stopped the game for every broken Cheltenham fingernail, he allowed play to continue with 2 T-Birds down injured, so that Cheltenham could score under the posts and end the game at 17-34.

Despite the unsatisfactory end, the trip home on the coach was better than the trip down!!

Now with an Xmas break the T-Birds will welcome Henley Hawks to Oakfield on January 8th.

As always, Thurrock Ladies, the T-Birds, welcome new players of any standard to their 2 teams.
No matter how big or small, there is a place for you in a Rugby Team. Many are beginners, playing in their first Season, so don’t be put off if you are new to the game.
We can promise you great training and a great social life. Just turn up on a Wednesday evening at 7.30.