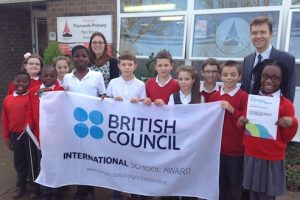 THAMESIDE Primary school in Grays has been awarded the British Council’s prestigious International School Award in recognition of its work to bring the world into the classroom.

The International School Award is a badge of honour for schools that do outstanding work in international education, such as through links with partner schools overseas. Fostering an international dimension in the curriculum is at the heart of the British Council’s work with schools, so that young people gain the cultural understanding and skills they need to live and work as global citizens.

Thameside’s work international work includes creating partnership with schools in Spain, becoming pen pals with other students in schools around the world and learning about different cultures.

Thameside Primary children now have a much better understanding of different countries and cultures, which they can apply to other areas of the curriculum.

John Rolfe, from the British Council, said: ‘The school’s fantastic international work has rightfully earned it this prestigious award. The International School Award is a great chance for schools to demonstrate the important work they’re doing to bring the world into their classrooms. Adding an international dimension to children’s education ensures that they are truly global citizens and helps prepare them for successful future careers in an increasingly global economy.’

The award is now available worldwide in countries such as India, Sri Lanka, Egypt, Lebanon, Cyprus and Pakistan as part of the British Council’s Connecting Classrooms programme. Around 5,000 International School Awards have been presented to successful schools in the UK since the scheme began in 1999.