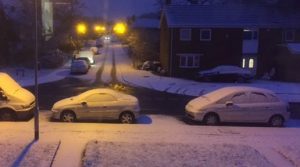 CONNECT Plus Services, which operates the M25 road network on behalf of Highways England, asked its customers to name its winter fleet at the beginning of December.

The organisation has 35 gritters, sprayers and snow ploughs based at eight winter service depots across the M25 road network and is on standby 24/7 throughout the winter months to keep the motorway and its major trunk road connections running. With 166 qualified drivers, they are ready to spring into action as soon as the roads need treating.

The naming campaign was launched via the CPS website and its Twitter feed (@CPServices_M25), inviting suggestions throughout the first three weeks of December.

“We were delighted by the response” says managing director Brian Johns. “We received more than 200 suggestions from local schools, our customers and staff.”