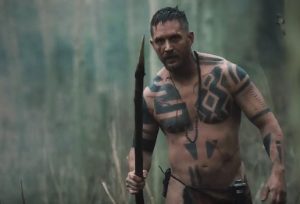 THE historic site of Tilbury Fort on the Thames Estuary is taking centre stage in a major new eight-episode drama series which starts on BBC One this weekend.

Parts of Taboo – which stars Tom Hardy – were filmed at the English Heritage site last year when the fort was transformed into the streets of 1814 London, the location for a number of the show’s key scenes. Tilbury’s historic gunpowder magazines were also used for some of the programme’s interior scenes.

Set in 1814, Taboo follows James Keziah Delaney (Hardy), a man who has been to the ends of the earth and comes back irrevocably changed. Believed to be long dead, he returns home to London from Africa to inherit what is left of his father’s shipping empire and rebuild a life for himself. But his father’s legacy is a poisoned chalice, and with enemies lurking in every dark corner, James must navigate increasingly complex territories to avoid his own death sentence. Encircled by conspiracy, murder and betrayal, a dark family mystery unfolds in a combustible tale of love and treachery.

Dan Collard, English Heritage’s Property Manager at Tilbury Fort, said: “We were delighted to host the filming of Taboo here at Tilbury Fort and are really looking forward to seeing the story of James Keziah Delaney unfold on screen over the coming weeks.

“We had to strike a careful balance between the protection of the historic site which is in our care and the film-makers’ requirements, which I feel we achieved very well. It’s a fantastic opportunity to show off Tilbury Fort in a really high profile production, and filming opportunities like these are a valuable source of income for us as a charity.”

Located on the Thames estuary, Tilbury Fort has protected London’s seaward approach from the 16th century through to the Second World War. Henry VIII built the first fort at Tilbury and it was here that Queen Elizabeth I famously rallied her army nearby to face the threat of the Armada. Today the fort is the best example of its type in England, with its circuit of moats and bastioned outworks.

Taboo airs on BBC One on Saturday evening (7th January) at 9.15pm. For more information at Tilbury Fort, visit: www.english-heritage.org.uk/tilburyfort.